A Tribute to the director and producer Christos N. Karakasis will take place at the 3rd Greek Cinema Week in Moscow. During the tribute six of his films will be screened for the audience. The films represent twelve years of creativity and they cover a wide range of themes. The films, which are characterized by the particular writing and philosophical view of the international award winning director, have a very successful independent journey and acceptance worldwide. The films will be screened with Russian and English subtitles. The 3rd Greek Cinema Week, organized by the Hellenic Culture Center (KEP), in collaboration with the State Film Archive of Russia - GOSFILMOFOND, will be held from 2 to 9 October 2017 in the historical cinema "Illusion"

Τake a Τrip  Greece-England  2014 ,30’ Organization of Production  Vasiliki Kappa ,Director of Photography   George Devon, Christos N. Karakasis  ,Dionisis Dimas  ,Music Composition  Gregory Giarelis ,Production Assistant Maria Kappa ,Assistant director Nikos Psaltakis ,Screenplay Direction Christos N. Karakasis – KOYINTA Production
I’ m travelling. I’ m leaving a city behind me for another city. I hope a different one. I suppose, someone else must be travelling to reach the city that I’m leaving. Maybe the journey takes place only inside us. Maybe the city itself is only inside us. What indeed is a city, rather than the way we see it. Violence follows me everywhere. For a while the colors fade and the place loses its power, I'm not sure where I am. How different is a tourist town from a real one.

Ideas have their own life. They have their own zone. Staying there, all together, waiting for a hand to touch them. Maybe a mind to alter them. Or someone to conceive them from scratch like they never existed so far. Does parthenogenesis really exist? It doesn't exist. It exists though. No, it doesn't exists. It exists. Every time it is born again. In the glance of a new artist. Nothing is born in the same way. Everything looks alike and everything is different. An idea is always new

“morphologie”, in France it is more like “morphogenesis”. So,i think in a morphogenetic way, to create shapes, forms. Therefore, I called my first two exhibitions “morphogenesis one and two”. And these in here are based on the morphogenetic way of thinking, meaning to create shapes that don’t really exist. They might be referring to something; this for example, might be referring to the fibers of human muscles. You take the inner metal part and wrap it around. The shape that is now created did not exist before. But we might think it did, or it exists in our mind Dimitri Mantikas

"Between two homelands" that tells about a Greek immigrant, Ilias Missyris, who moved to Finland and how he adjusted to Finnish way of living. He discovered in Finland the Finnish-Greek associations, Greek music and that way felt more strongly his Greek identity and a new kind of patriotism. He felt often homesick for the country he wasn't staying at the moment (of his two homelands) but gradually the longing for the other started becoming weaker and he enjoyed his life wherever he was. The idea of making a documentary about people who have found another home began many years ago.

When I met Ilias I immediately wanted to do a documentary inspired by his life. What moved me was the fact that Ilias’ journey had started for him when he was 7 years old. The truth is that during the film process we, the creative team, we all entered an inner journey stage. After this inner jouney of ours we ’ve become much better people and I wanted to share this feeling with as many as I could. After this journey we are simpler, more conscious seekers of beauty of life and human relations, and our thoughts are far richer!

The excellent  text written by the author Vasiliki Kappa was born as a synthesis of lyricism and philosophical thinking. Vasiliki has followed this journey of self-awareness, as we all did, and thus we essentially achieved to capture the something that makes a project special; to be simple, to be about human nature and enable us to think about tomorrow, while building the present, currently living in today, and critically looking back at yesterday! 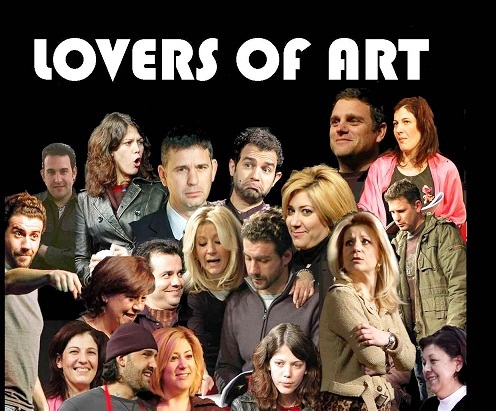 Lovers of Art  Greece  ,  2010 ,45’ ,Text- Narrator Vasiliki Kappa Music Composition ΟΜΜΑ Vangelis and Periklis Boulouhtsis Assistant director Labrini Papadimitriou Screenplay direction Christos N.lovers of art Karakasis  ,KOYINTA Production
We filmed a team of amateur actors for three years. They did theatre during their free time. What was their motivation for participating happily and patiently like real professionals do? Amateur actors, erasitexnes in Greek, lovers of theatre, will study their parts silently, without any expectations to be rewarded, this though doesn’t mean they will stay on the surface. Most times they will go deep inside themselves, magic and beauty will emerge from their heart, a lot of energy will be produced on the amateur stage. Passionate affairs last long, that the reason why many amateurs will also develop special skills.

The Excursion began as a documentary with an intense search of space in relation to time and the land and how this is expressed in the daily life, and how it influences the people and their habits.

For all those who embarked with us on this journey in Ioannina having lived there for many years, it was an occasion, to reminisce on sweet, beautiful, relaxed moments, to walk again by the lake together with old and beloved friends, to see the city once more and how it changes.

For all those who live in the city of Ioannina, this documentary was a chance to escape from the narrow limits of a melancholic and claustrophobic city, and to see Ioannina from a different point of view. The documentary and we along with it, sought to feel the intense oppositions of the landscape. To find the measure of the past with the future and their relation with our own present (the present of the film), the reconciliation with ourselves, our personal glance, the journey of our life!

Christos N. Karakasis was born in Athens. He studied Film-Theatre-TV Direction, Computer Science, Music and Humanities. He has Postgraduate Diploma in training and development, and  Post graduatee diploma in film and theatre direction .He has supervised, technically supported and produced various audiovisual events, presentations, adverts, video art projects, festivals.As a Director-Producer he is active since 1992.

His films have been screened in Greece and abroad and have been awarded in international film festivals. He is a member of the “Greek Directors' Guild .He is the Artistic Director of “ATHENS INTERNATIONAL DIGITAL FILM FESTIVAL” (www.AIDFF.com), which achieved alignment of the cinema reality in Greece with the major international developments in the Cinema era, which is steadily moving towards the Digital Age.

He is the Artistic Director of the “INTERNATIONAL SCIENCE AND ECOLOGICAL PANORAMA”, which contributes to the dissemination of science through the power of new media and digital technologies currently used by scientists around the world. He is the writer of a book titled “Introduction to Cinema” which can be helpful to all aspiring filmmakers, but also to those who want to study in a direct and concise manner the art and technique of filmmaking. arthrography at  filmmaker and koyinta art emagazine.